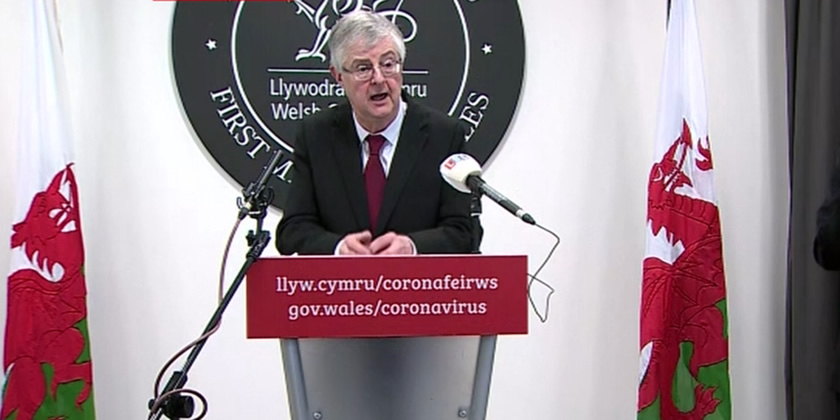 The First Minister Mark Drakeford has given some insight to how the coronavirus spread is thought to be taking place, with a ‘hotspot’ being identified possibly due to more testing taking place in that area.

The full briefing video can be found below which contains the full information given out today.

The First Minister has explained why geographic breakdown of coronavirus related figures is not taking place in Wales.

Mr Drakeford was asked the question in the now regular Welsh Government daily briefings, and was asked if death related data would again be released more specifically.

The First Minister said, “I think the answer will lie in the numbers, because the numbers in Wales are still relatively low. If you share them out between all seven health boards, it becomes relatively possible to identify those individuals by name and circumstance. The reason we’re not doing that is in order to protect the privacy of those individuals and their families.

“If we do get to a point where the number of deaths that we are announcing moves beyond the point where at a local health board level it will be possible to do that, we will revisit the way in which we are announcing things. But, because the numbers are where they currently are, we’re not announcing them at a disaggregated level in Wales, in order to protect the privacy of individuals and families had such a difficult time.”

The First Minister was also asked about testing, and told the public that NHS staff were being tested, “Since the 18th of March over 1000 tests of NHS staff in Wales have now been carried out. Many of those people are then released back to the frontline, because the point of concentrating on those staff is that we didn’t want to people self isolating in circumstances where they weren’t affected by the disease.

“I’m not aware that we published figures that break down the thousand into people who hadn’t didn’t have the virus, but what I am confident about is that that approach has succeeded in doing what we wanted to do, to make sure that people who don’t have coronavirus aren’t staying at home unnecessarily by testing those people. They’re back in the front line and doing the vital work we need them to do.”

Antibody testing will be used ‘soon’ in Wales with the immediate focus again being for frontline NHS staff. The First Minister explained, “It’s a blood test and it will let people know whether they have already had the disease, and whether they have immunity to future attacks. Our intention is to introduce the antibody test in the same way as we have introduced the existing antigen test. In other words, as supplies of that new test become available, the first call for it will be frontline NHS staff because again, we want to make sure that as many of those are able to carry on in work as possible.

“We will then extend it inside the NHS and outreach to social workers, providing help for people in their own homes or in residential care and then we will move on to other groups beyond that, including when volume of testing is sufficient to members of the public.

A question was asked about the spread of the virus, and if there were any specific concerns. The First Minister said there are “hotspots” around the UK, including in Wales.

An issue in Gwent was referenced, with speculation that it could be a hot spot due to having “a very early case of a member of health boards staff acquiring the virus and therefore testing in Gwent was carried out more vigorously and more widely and more earlier than in other parts of Wales, and we may simply be partly picking up the result of that. It looks like there’s more there, because we’ve tested more people there than elsewhere. ”

The First Minister said, “There is evidence that the disease is moving east to west across the United Kingdom, and Newport is right at the eastern end of Wales” and therefore would be expected if that was the case. Population density was also referenced, “The more people that are in an area, the faster the disease circulates”.

“We have very strong daily contact with the Welsh Local Government Association, and are determined to go on using part of the fund, the £1.4 billion pounds we’ve announced last week, to recognise the extra challenges that local authorities face.”