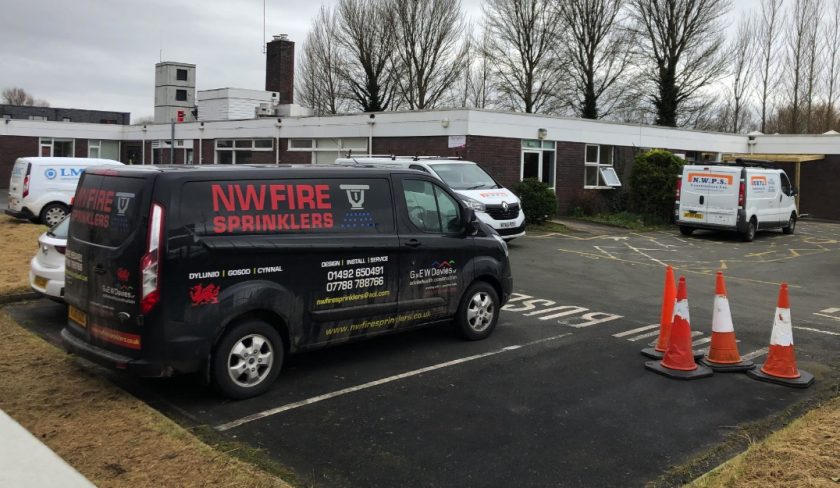 Contractors are racing against time to get a new night shelter ready ahead of a severe storm which is forecast to hit the region over the weekend.

Work vans have been seen outside The Glanrafon Centre – which is opposite Deeside Leisure Centre – for several weeks, today the numbers have swelled as sprinkler system engineers and electricians look to complete work on the shelter.

The Glanrafon Centre had been left unoccupied following the opening of a new £4m day centre for people with learning disabilities close by.

Plans were approved in January to refurbish the building and create a night shelter housing 12 beds for rough sleepers.

When SWEP is activated emergency accommodation is open for anyone experiencing rough sleeping.

The Met Office has said Storm Dennis – as it’s been named –  will bring very heavy rain and strong winds this weekend, with a risk of flooding and travel disruption in some areas.

They have issued multiple National Severe Weather Warnings for wind and rain from Saturday through to Monday.

The new facility will now open on Saturday afternoon at 3pm and close on Monday 9.30am.

Connah’s Quay councillor Bernie Attridge questioned council bosses decision not to activate SWEP – despite it being active just six miles away in Chester.

Cllr Attridge said he had been “inundated” with calls and messages over the weekend regarding rough sleepers in Connah’s Quay and Shotton asking if the emergency protocol had been activated, as it had been in Chester.

Overnight on Saturday a new tent was erected outside Connah’s Quay library as a rough sleeper sought shelter for the night.

The entrance to the library has become a regular site where rough sleepers have pitched tents over the past few months.

Cllr Attridge, Leader of the Flintshire Independents Group, said he was “disappointed” to see the tent appear and asked council bosses why SWEP had not been activated in the county.

He said, “I’ve had reports of people sleeping in polly tunnel on allotments and at rear of swimming baths near the fan heaters keeping warm.”

Flintshire has been without emergency accommodation after a pilot scheme was withdrawn at short notice in September.
The council’s Chief Officer, Housing and Assets, Neal Cockerton, said:

“The Council has, over the last few days been undertaking some detailed planning work as a precautionary measure in relation to the activation of the night shelter and can confirm that the facility will open on Saturday afternoon at 3pm and close on Monday 9.30am.

This is based on the weather information received.

We will be raising awareness of this activation through our usual networks so that those who are rough sleeping are notified”.

Figures published this month by Welsh Government show the number of rough sleepers has tripled in Flintshire in the past 12 months.

Data gathered in Wales over a two week period in October last year, followed by a one night snapshot count in November. revealed there were 10 rough sleepers in Flintshire, up from 3 in 2018.