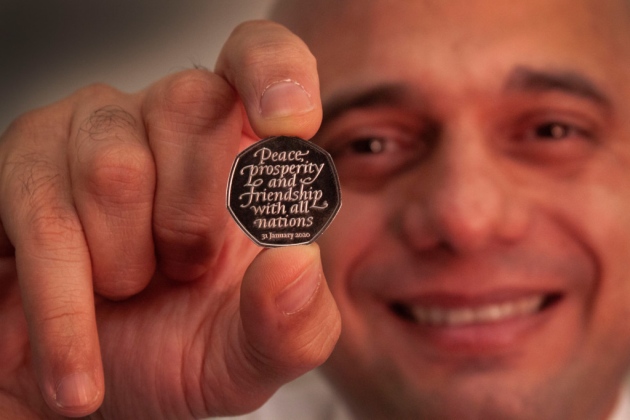 The Chancellor has unveiled the first images of the Brexit coin, a 50p bearing the inscription ‘Peace, prosperity and friendship with all nations’ .

Three million Brexit coins will go into circulation on Friday when the UK officially leaves the European Union.

It is the third version of the commemorative currency after the departure date was twice delayed, millions of coins from the previous versions had to be metled down.

As Master of the Mint, Sajid Javid was given the very first batch of Brexit coins one of which he will present to the Prime Minister this week.

More than 13,000 people have already registered their interest in a commemorative version of the coin which is available to buy from the Royal Mint.

Commenting after seeing the coin for the first time, the Chancellor of the Exchequer, Sajid Javid said:

“Leaving the European Union is a turning point in our history and this coin marks the beginning of this new chapter.

As part of the launch, the Royal Mint will also open its doors for 24 hours to let people strike their own commemorative coins.”