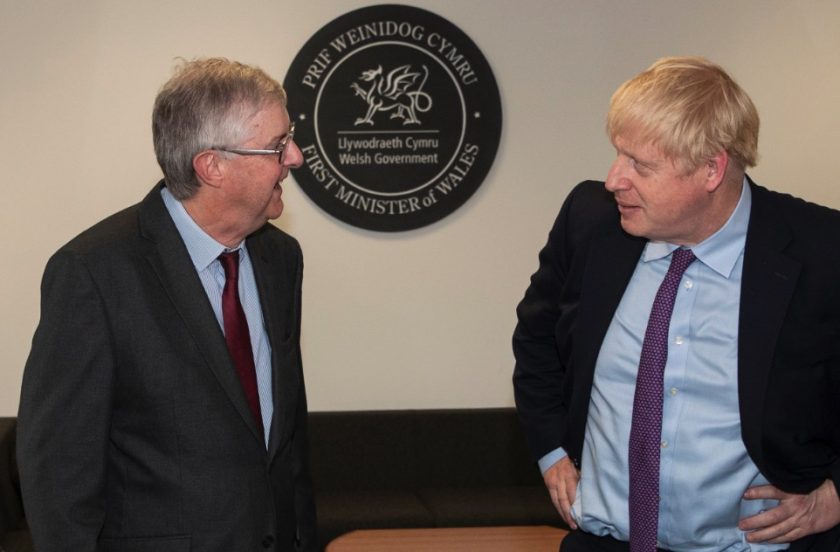 Mr Johsnon will announce later today that pubs, bars, restaurants and other hospitality venues in England will have to close by 10pm from Thursday. Hospitality outlets will also have to offer table service only.

It’s reported that PM will urge people in England to once again work from home where possible, the Welsh government has continued to advise people to “work from home if you can.”

The new measures in England will be announced by prime minister in Parliament followed by a live address on tv at 8pm.

A Number 10 spokesperson said. “During these calls, the Prime Minister made clear that the rising infection rates are a cause for great concern, which he is taking very seriously.

“He reiterated his unwavering commitment to working with the devolved administrations as we continue to tackle the virus.

They all agreed to act with a united approach, as much as possible, in the days and weeks ahead.”

The Prime Minister invited the First Ministers and the deputy First Minister to attend a COBR tomorrow (Tuesday) to discuss next steps for the country.”

It’s not known as yet if Wales will adopt the 10pm closing time rule for hospitality.

The moves to come after the Covid-19 alert level was moved to 4, meaning transmission is “high or rising exponentially.”

UKHospitality chief executive Kate Nicholls said: “These restrictions will come as another crushing blow for many hospitality businesses struggling to recover so it’s crucial these new rules are applied with flexibility.”

“A hard close time is bad for business and bad for controlling the virus – we need to allow time for people to disperse over a longer period.

Table service has been widely adopted in some parts of the sector since reopening but it is not necessary across all businesses, such as coffee shops.”

“It is hard to understand how these measures are the solution to fighting the disease when Government data shows that just 5% of infections out of the home are related to hospitality.

Where such restrictions have been put in place locally they have not cut infection rates, merely damaged business and cost jobs.”

Health minister Vaughan Gething has urged people across Wales to follow the social distancing guidelines, warning that “a minority of people who choose to break the rules can have a really significant impact on the on the wider community.”

It comes after additional coronavirus restrictions were announced following an increase in cases in the Blaenau Gwent, Bridgend, Merthyr Tydfil and Newport areas.

Caerphilly and Rhondda Cynon Taf were the first areas to go into lockdown.

The measures, which come into force at 6pm today means that large parts of South Wales will be in “local lockdown.”

Speaking during Monday’s Welsh Government briefing, Health Minister Vaughan Gething outlined where the cases in the four local authority areas can be traced to, and cited a lack of social distancing and pubs as a reason for some of the cases.